Insects typically have a variety of complex exoskeleton structures, which support them in their movements and everyday activities. Fabricating artificial exoskeletons for insect-inspired robots that match the complexity of these naturally-occurring structures is a key challenge in the field of robotics.

Although researchers have proposed several fabrication processes and techniques to produce exoskeletons for insect-inspired robots, many of these methods are extremely complex or rely on expensive equipment and materials. This makes them unfeasible and difficult to apply on a wider scale.

With this in mind, researchers at the University of California in San Diego have recently developed a new process to design and fabricate components for insect-inspired robots with exoskeleton structures. They introduced this process, called flexoskeleton printing, in a paper prepublished on arXiv.

“Inspired by the insect exoskeleton, we present a new fabrication process called ‘flexoskeleton’ printing that enables rapid and accessible fabrication of hybrid rigid/soft robots,” the researchers wrote in their paper.

So far, hybrid robots with both rigid and soft components have been typically built using expensive materials and 3-D printers, as well as multi-step casting and machine processes. In their study, the research team at UC San Diego set out to create a new fabrication method that is cheaper and easier to use. 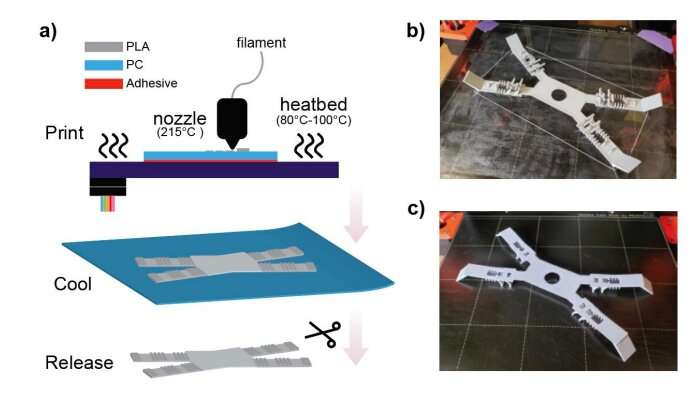 Flexoskeleton printing, the method they developed, relies on an adaptation of a consumer grade fused deposition material (FDM) 3-D printer, which provides an extremely strong bond strength between the deposited material and the printer’s flexible base layer. This process can be used to create exoskeletons for insect-inspired robots with different shapes and morphologies.

Remarkably, the fabrication approach proposed by the researchers can be used by both novice and expert users, as it is fairly straightforward and easy to understand. It is also far more affordable than alternative fabrication methods, as the materials and equipment it relies on are considerably cheap and readily available.

In their study, the team demonstrated the feasibility of their approach by using it to design and test a wide variety of canonical flexoskeleton elements. They then combined all the elements they produced into a walking four-legged robot with a flexible exoskeleton structure.

“The approach we have developed relies heavily on the interrelationships between three dimensional geometry of surface features and their contributions to the local mechanical properties of that component,” the researchers wrote in their paper. “We envision that this method will enable a new class of bio-inspired robots with focus on the interrelationships between mechanical design and locomotion.”

In the future, the new design and fabrication process devised by this team of researchers could enable the development of numerous insect-inspired robots. As the technique is far more straightforward and affordable than most existing methods, it could also make existing or new robots easier to scale up, increasing their chances of being produced in larger quantities and appearing on the market.